Something Meaningful: Music n’ Lyrics by Shankar-Ehsaan-Loy and Javed Akhtar

This collection is simply titled Something Meaningful because of the beauty of its simplicity. We have chosen a great magical combination of Shankar Ehsaan Loy and Javed Akhtar who are celebrating 20 years of professional association. Their collaboration has given Indian Cinema numerous hits right from early 2001 till date. Shankar Ehsaan Loy have gained a reputation of a first class music composers, one of the best in Indian Music Industry. Their overall contribution to music is huge, they have scored music for many advertisements as well. They have a great ability to adapt to the theme of the movie and create a style of music that perfectly compliments the movie. Their music arrangements are a blend of Indian Classical, Techno, Electronic, Sufi, Rock and whatever other genres that exist on this planet. They are seriously not typecast.

The super-hit collaboration of this musical trio and legendary writer Javed Akhtar, (who need no introduction at all) have given us hits in movies like Dil Chahta Hai, Kal Ho Na Ho, Wake Up Sid, Dil Dhadakane Do, Kabhi Alvida Na Kehna and more.Their major collaboration have been on the projects of Farhan Akthar, Zoya Akhtar, Karan Johan. This collection explores songs that have in-depth meaning, written in a very simplistic way, few inspirational and motivational tracks, some poems and soulful songs along with a couple of dance numbers to add some spice.These songs have a wide variety of musical style, a blend of almost all type. So let us listen to the great songs that are filled with great emotions and meaning. 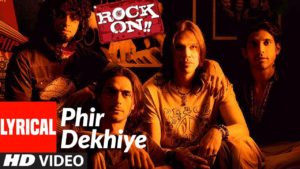 Phir Dekhiye is a hindi song from the 2008 movie Rock On!!. The song features Farhan Akhtar, Arjun Rampal, Purab Kohli, and Prachi Desai. The beautiful song is shown towards the end of the movie and concludes it. The song shows the reunion of the band members after finding some contentment, satisfaction and climax in their lives after performing live after many years – their major dream. They also miss their drummer who passes away – an untimely death. The director of the movie couldn’t have asked for more in this song. Beautifully sung by Caralisa Monteiro, the soothing track has amazing contemporary lyrics that has very deep meaning. The poetic nature of the song makes it one of the best song of this collaboration. The strumming of the guitar is soft and takes us in a dreamy world. 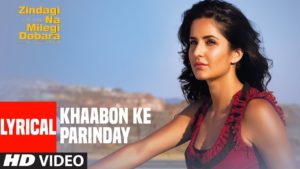 This is by far one of the best songs from the soundtrack that has a great variety of songs from diverse genres. The simplicity of this song does all the justice to the situation of the song in the movie. Javed Akhtar has a reputation of surprising listeners with his writing and this song is a perfect example. A blend of soft music and fabulous lyrics. This soulful track is a perfect track for long rides and shows a carefree approach to life. The emotions of the characters are beautifully conveyed by the playback singers. All the elements in this song fuse to perfection. The song is recorded using mostly acoustic guitars for rhythm and lead pieces just like a soft rock song. Alyssa Mendonsa and Mohit Chauhan add all the magic to the song with their beautiful voices. The playback singing is of the highest level and makes it one of the most loved tracks of the soundtrack. 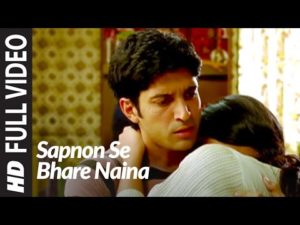 Shankar-Ehsaan-Loy have built a reputation of providing very very different songs throughout their career in almost all the movies they have contributed music to. They have fused Indian classical and electronic music in this song and yet achieved the desired result. The singing by Shankar Mahadevan is out of this world and can be said to the best. The song is about the struggle of various aspiring actors in the film industry and the process of audition that challenges them. The song is about their journey, their ambitions, their fear, their dreams, their innocence and most importantly their luck. He has effortlessly managed to communicate the emotions brilliantly through his singing to describe them perfectly. Javed Akhtar has described these emotions in easiest possible ways by using very simple words. All in all this song is a masterpiece due to its musical arrangements apart from singing and lyrics. The use of drum loops and heavy bass guitar is the highlight of the music arrangement. The video features Farhan Akhtar as Vikram Jaisingh, a struggling actor who comes to Mumbai to make it big in the industry. 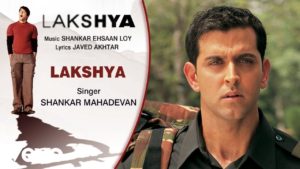 Lakshya – the war drama film is regarded as a cult film among the audience. The highlight of the movie was Hrithik Roshan’s brilliant performance as Lieutenant Karan Shergill, who leads his team to victory over the Pakistani troops. The movie was Farhan Akhtar’s second movie as a director. Lakshya the title track is a power packed song which is an inspirational song of highest quality. The music is beautifully fused in the trademark style of Shankar-Ehsaan-Loy Lakshya, a blend of indian classical, modern day rock and pop. Javed Akhtar again keeps it simple for the listeners without adding any complexity to the lyrics. The treatment of the song is grand using instruments like strings, drums and bagpiper. Shankar Mahadevan adds his quality vocals and great sense and meaning to the songs emotions. A great patriotic and motivational song. 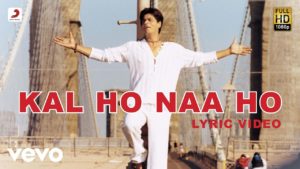 The movie has made millions cry and the song became the ringtone of almost all the fans of Shah Rukh Khan in India and across the globe. The song has left a deep impact on the audience and goes hand in hand with the theme of the film and the situation of the song. Not many songs in the industry are completely in sync with the story line of the movie. Sonu Nigam’s vocals in the song cannot be defined in words. The legendary singer has sung the song to its truest potential. The tune is simple and very very catchy. The song has great depth and meaning. Javed Akhtar again uses the magic of his writing to create a song that is not easy to forget after hearing for just a few times. The message given by the character, played by Shah Rukh Khan, is perfectly communicated by Javed Akhtar. It is one of those songs which can never be forgotten and will be cherished forever. 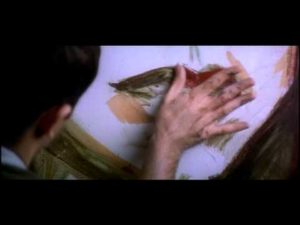 Dil Chahta Hai became an instant hit among the youth and masses as soon as it released. The movie was loved and adored for variety of reasons including the freshness it brought to Indian Cinema. Farhan Akhtar was accepted as a director with open arms by the audience making him one of the few to achieve great grand success in his debut film. The character played by Akshay Khanna was a matured character among the three friends and falls in love with a woman of almost double his age. This also being his first love, his pure emotions for his love are perfectly conveyed by this song. The composition is very progressive and again uses variety of drum loops, guitar plucking in clean tone and strings. The melodious song has great chord sequences and it appears that there are frequent scale changes in the song making it a complex composition and a nightmare for any beginner musical aspirant. Javed Akhtar has used metaphors throughout the song, which again easily communicates the true meaning to the listeners. 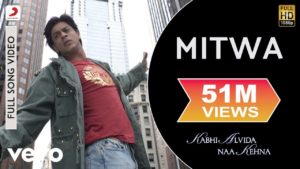 ‘Love will find a way’ ?what a beautiful opening lines in ‘Mitwa’, a song that is loved by one and all. Mitwa a sureshot chartbuster song upon release, captured the hearts of listeners who loved the sufi style of composition and treatment. It features the voices of Shafqat Amanat Ali, Shankar Mahadevan and Caralisa Monteiro. The movie’s music is directed by Shankar-Ehsaan-Loy. The video features Rani Mukherjee and Shah Rukh Khan where he is searching for something unknown, he is directionless. A touh of Indian classical music fused with Sufi Rock is what Mitwa is. Great Alaap by Shankar Mahanadevan adds distinct Indian folk feel to the song. Beautifully written by Javed Akhtar the song effortlessly conveys the on-screen chemistry of the lead pair. A great song to listen any time of the day.

Aaj Ki Raat is a 2006 Hindi song from the Bollywood film soundtrack for Don: The Chase Begins Again, a remake of the 1978 film Don. This song became immensely popular because of the choreography of the video. Choreography of the song was done by veteran choreographer Saroj Khan. The classic genre of 1980s retro-disco was recreated by Shankar-Ehsaan-Loy. The synthpop styled arrangement of the song is evident as most of the elements it had were from the 1970s. The song was performed by Alisha, Mahalaxmi Iyer & Sonu Nigam. The lyrics were also written in a retro fashion, with Javed Akhtar being a co-writer of the original movie. 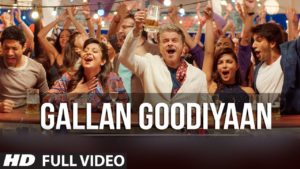 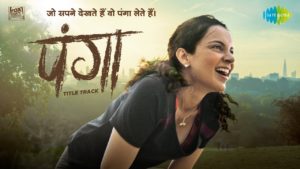 This song is the latest collaboration between Shankar Ehsaan Loy and Javed Akhtar. The title song is featured in Kangana Ranaut starrer Panga. The song is sung by Harshdeep Kaur, Divya Kumar and Siddharth Mahadevan. The song shows the efforts of the lead played by Kangana Ranaut and her onscreen family to revive her career as a kabaddi player. The inspirational song became very popular among Indian families.

We hope that you have enjoyed this collection of meaning songs that are written in very simple words couples with extraordinary music. We may have missed out on few hit songs. Please don’t hesitate to share your favorites in the comment section.