​It was the winter of 1952. Ciba-Geigy Ltd approached Radio Cylon’s Bombay division to prepare a small half n hour radio program, to popularize their toothpaste brand Binaca, and thus was born the legendary radio show Binaca Geetmala. This small marketing event gave birth to a radio show that became a habit in Indian households for four decades. Also, it became an inspiration to a group of music aficionados after sixty years to revive the same good old radio listening experience in little innovative way. But how?
Cut to the year 2021. A few music aficionados in the same port city, which is now Mumbai, conceived an idea of playing songs and share the nuances of music, artists associated with those songs with like minded music lovers. This idea culminated to form a Guided Listening Show called Jukebox. Jukebox is a part of the Nostalgiaana group, which has been doing shows based on vintage and retro songs and was earlier known as Rewind group.

How is the Jukebox show different from the other music shows on different platforms?

While everyone loves to listen to music, not many are musically aware. So, when a person is listening to a song on broadcast or streaming platform, they are listening to it without knowing or understanding the details of its orchestration, singing or any other elements. Imagine a studio or a jamming session where musicians explain the intricacies of the music and the nuances of song before performing. Listening experience gets enhanced manifold. This is guided listening. When the audience is made aware of relevant details of music and then it is played, listeners can connect with it in a much better way.” explains Kunal Desai, content curator and the co-host of Nostalgiaana Jukebox.
“In today’s world, there are several mediums to listen to the songs. But we solely focus on the Guided Listening pattern. For a non-connoisseur, when they like a song, they are not able to interpret what they liked. With guided listening sessions, we try and discuss not just the music or song, but its making, classical connections, its arrangement and even try and highlight the unsung heroes who have made the song possible, who unfortunately remain unappreciated most of the times.” Says Kalpana Swamy, content curator and the co-host of Nostalgiaana Jukebox. She adds, “We try to highlight the nuances of the song leaving aside the already known unnecessary information floating on public domain. We, at Nostagiaana believe in the concept of appreciating Film music as an art form and bring forward the art, literature and music in a film song which is one of the most powerful audio-visual modes of communication. Our members appreciate our efforts and find our format enjoyable adding to their listening experience”

What is fascinating about these music shows is that listeners would always remain intrigued about the playlist and the discussion on each song.

Another important fact about it is that while such a guided listening format is available for vintage and golden era music, Jukebox is probably the only show that focuses on music of mid 80s and beyond.

How did you get the idea of starting something like Jukebox?

As people born in the 80s, both Kunal and I have grown up listening to music of the 90s apart from vintage collections. Both of us feel passionately about the music of that decade. The songs which made chartbusters were not necessarily the only melodies created. There are many beautiful compositions which couldn’t make it to the top. Nostalgiaana already had a similar format show catering to the songs from 50s to early 80s, which is widely appreciated, we realised that the 90s segment had a void, and we were confident we could come up with a wholesome entertaining format. That’s how Jukebox was conceptualised.

How do you intend to connect music lovers to music from the 90s and beyond?

Our show is curated in such a way that we engage the serious audience with information and the younger audience with the uniqueness of songs. Our connection and approach are strengths.

What challenges do you face while preparing for the show?

Keeping the listeners intrigued and creating engaging content in every episode is the biggest challenge. We want to ensure the audience feels surprised in each episode and wishes to tune in the next episode.

Who do you think are the game changers in the field of music in the 90s?

The 90s was a very vivid decade. The earlier decade had left many questioning the future of Hindi film music. The 90s brought in some very different and refreshing flavours and every music director brought in their unique style and approach. While Nadeem Shravan recreated the elaborate orchestration, Jatin Lalit had a very crooning romantic feel to their music. A R Rahman introduced us to new sounds. The 90s in a way brought a level field for experimentative artists and we enjoyed some really great creations by not one but many game changers.

The reason for selecting this period, the hosts unanimously explain –

Generally, it is believed that melodies started fading out in ‘80s and ‘90s. But the interesting fact is that the end of the ‘80s brought back melody in film music and contrary to perception, ’90s has given us some great variety of music. Ironically, the commercial commitments and publicity held back many melodies in the closet. Digital technology advancements further has helped the sound become better and there is a great repertoire of harmonious music not just in films but also non-film and regional genres that seldom come to surface.
Our Endeavor is purely to unearth these gems, along with melodious popular numbers and give them their due respect. Through our shows, we highlight the regional and non-film songs that remain unnoticed by audience at large”.
Nostalgiaana Jukebox was born out of the passion for music but now it has been patronized by many music lovers. After successfully completing 50 episodes, it is inching towards the century mark.

Testimonials by the music lovers for the credentials of the Jukebox – 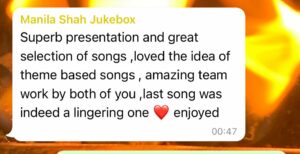